The Spanish striker started six times for Bengaluru FC but could not score a single goal….

A brace against FC Goa and a goal against ATK, Manuel Onwu announced his arrival at Odisha FC by marking himself on the scoresheet against two of the best sides in the Indian Super League (ISL). However, these goals were in vain as Odisha suffered defeats in both the games.

On Friday, the Spaniard was their most impactful player in a crucial must-win encounter against NorthEast United. The Highlanders scored against the run of play in the 24th minute and maintained the lead until the break. They were guilty of wasting several opportunities before the berak to equalise.

But the hosts turned it around in the second half, with the former Bengaluru FC striker equalising just two minutes after the break. Xisco Hernandez supplied Nandhakumar on the left flank. The winger delivered played in a cross to the edge of the six-yard box. Onwu had arrived just in time to boot it in from close range and thus became the first player to score in three consecutive games for Odisha.

28 minutes later, he was sharp enough to deflect his header off Xisco’s delivery from a corner to Martin Perez Guedes at the far post. The Argentinian squeezed it in give his side all three points.

It is curious as to how a player who suffered heavily at Bengaluru picked up steam so quickly at Odisha. While Bengaluru FC play more direct, Gombau’s Odisha like to build the game up at their pace. Odisha’s game looks to be tailored for Onwu at the moment.

However, it was not just Onwu who helped turn the result around for Odisha. Gombau’s substitutions worked like a charm, and the tactical tweaks paid off almost immediately.

He took off Shubham Sarangi and Vinit Rai for Daniel Lalhlimpuia and Jerry Mawihmingthanga– both attacking changes. This meant that there was an overload on either wing and Odisha were looking to adopt the crossing route towards NorthEast’s goal. It is hence unsurprising that both their goals arrived from crosses.

Gaurav Bora was yet another figure in the Odisha team that impressed. The youngster had his moments with surging runs forwards and he ensured that Andy Keogh’s participation in the game was minimised.

For the visitors, it was a case of Federico Gallego not receiving enough support in the final third. There were instances where Keogh and Chaves could have timed their runs better. The link-up between Redeem Tlang and the Irish striker was not up to the mark. In fact, the former had a poor game in particular, as he has had more often than not in the second half of the season.

These concerns top the long list of issues that the Highlanders must sort before entering the new season. Odisha have all to play for in their final match of the season.

Sat Feb 15 , 2020
The management had accumulated a collection of video messages from the partners of Mohun Bagan players and it was shown to them after NEROCA match… Mohun Bagan are currently on a roll in the I-League and they extended their unbeaten streak to 10 matches by decimating NEROCA FC 6-2 at […] 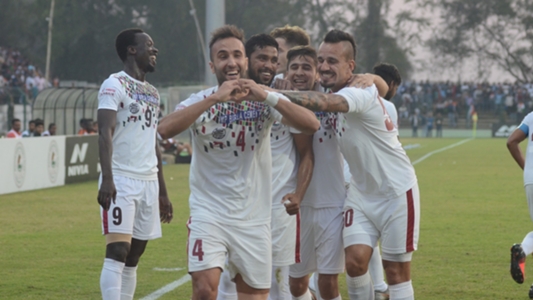